OKAY HAVE YOU PLAYED THEM ALL NOW

Ahem. Right. Disclaimer, I am a huge fan of the Mass Effect series, so my take on this topic may be more shamelessly geeky than usual. Not that I have ever been well-acquainted with shame.

So, Reapers. They’re the big, bad boogey-men of the Mass Effect universe. By the end of the first game they’ve established themselves as the villains of the series, a role they will maintain until the very end of game three. But at the beginning of the first game, you know nothing.

The very beginning of the series sets you up with familiar sci-fi villains: a race of sentient machines called the geth that’s set on destroying organic life. As you gradually make your way through the game, exploring the universe and getting to know the characters in it, you realize that there’s more to it than that. The geth aren’t end-game boss material, they’re the shock troops. It’s a good two-thirds of the way through game one before you hear much about the Reapers at all.

You learn that, long before humankind discovered a thriving galactic civilization, an ancient alien species called the Protheans created the technology that fuels interstellar travel. This technology is far beyond the most advanced scientists’ understanding. No one has been able to replicate it in the thousands of years since it was discovered. Traces of Prothean civilization span the entire galaxy—records that show they were studying us in the days before Australopithecus, observing our planet the way we might examine an anthill. They were unfathomably advanced.

The real villains of Mass Effect are the ones who wiped out their entire civilization.

They are the Reapers, and this is what they have to say to humanity:

You exist because we allow it. And you will end because we demand it.

Heavy, chilling, demanding stuff. They explain matter-of-factly that they are going to destroy all of galactic civilization—cull us like livestock that’s grown out of hand. Go ahead, ask them why—you have a chance to. In a refreshing change for a villain, the first Reaper you meet does not answer you.

It doesn’t have to. Why should it? You’ve had house spiders, right? Within the last week, I’ll bet you crushed a bug of some kind. You did not tell it why. You didn’t even think to. If you had, would it understand?

That’s how the Reapers think of humans (and their alien contemporaries) in the Mass Effect universe. This revelation is a huge pivot point in the first game: before, the worst case scenario was a war. It was the kind of thing that the galactic government figured one newly-minted space cop could handle. Suddenly, the entire galaxy is at stake, and so is everyone living in it.

Don’t think I don’t see you rolling your eyes in the back. Oh, no! The entire galaxy is at stake! That’s a completely new one that I’ve never seen before in any science fiction ever! Right?

Mass Effect does this differently—to great effect. You don’t start with a galaxy-wide threat right out of the gate. By the time you know galaxy-wide genocide is on the table, you’ve spent dozens of hours exploring a new world. You’ve seen the dangers humans face in a civilization of aliens who are distinctly unimpressed with the new kids on the block. You’ve met characters who have become your friends or maybe even love interests. You’ve traveled around the galaxy making peace between colonists, gangs, and entire species that are at each others’ throats.

Nobody wants to play a game for 60 hours and find out that everything they’ve done means nothing.

Fuck that, you say. After all that time learning how to play quasar and what the hell a quarian is? I even know how many testicles a krogan has. No. I did not use up brain cells on that for nothing. Destroy my galaxy? Fuck you, Reapers. Not today.

The Reapers are a real threat precisely because Mass Effect has given you something to lose.

But it gets worse. The deeper you get into the games, the more existentially terrifying the Reapers become.

It’s bad enough that they don’t think you’re even worth an explanation. We are used to getting explanations from our villains—in fiction, at least. By denying that, the Reapers bring the value of our existence into question.

Then you find out that all that “Prothean” technology that galactic civilization is built on? Yeah, it’s actually Reaper technology. It’s been there for a long time. I could look up the number of years, but it’s a bigger number than the human mind can fathom. This is because your civilization and the Protheans are just two “cycles” in a long, long series of purges that the Reapers conduct every 50,000 years.

By using their technology, you have fallen right into their trap. Sheep lined up for the slaughter.

So much for free will.

Oh, and speaking of free will, the Reapers also have an ability called Indoctrination. Just being in the vicinity of a Reaper for too long will cause a lesser being like, say, a human to lose their mind and fall under the Reaper’s control. This fantastic i09 article explores, among other things, the philosophical ramifications of the Reapers’ brand of existential horror: “The Reapers are biomechanical equivalents of the Elder Gods of H.P. Lovecraft.” It’s looking easier and easier to fight back, right?

So the Reapers have taken away our significance in the universe—our validity as sentient life—and they’ve warped the very civilization we’ve built into the mechanism that they will use to destroy us. What more could they possibly do?

Mass Effect 2—my favorite of the series—features a species of malicious scavengers known as the Collectors. You spend most of the game assembling a team to find out why the Collectors have been kidnapping entire colonies of humans. About halfway through, you discover a horrifying truth: the Collectors are what’s left of the Protheans. Their entire species has been made into mindless thralls of the Reapers, and they’re collecting humans to use as biological building blocks for more Reapers.

That’s right… the Reapers are made of the people they’ve destroyed.

We will become… zombies, basically. 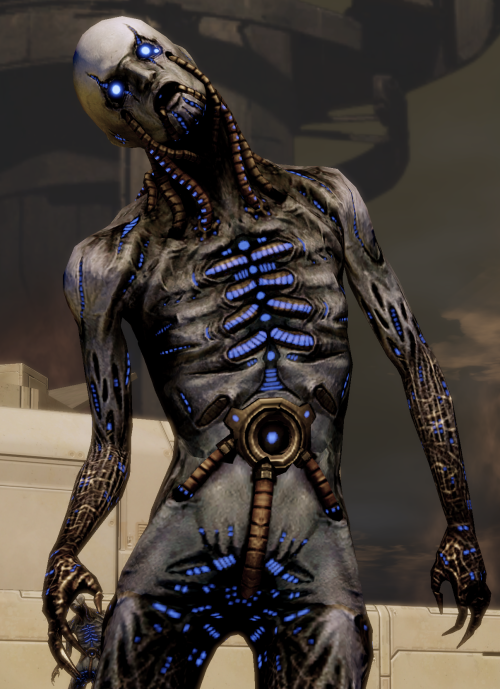 The first two Mass Effect games do an excellent job setting up the Reapers as a terrifying enemy—existentially, viscerally, and in terms of sheer power. The shot of the approaching Reaper army at the end of Mass Effect 2 is one of the biggest oh shit moments I’ve ever experienced playing a video game. The thought of facing a Reaper invasion in Mass Effect 3 feels simultaneously inevitable and completely unfathomable—it took all of Mass Effect 1 to take down just one Reaper.

The Reapers definitely have their moments in Mass Effect 3—the banshees, or Reaper-ized asari, made my skin crawl—but as you may have heard, many on the Internet did not feel that ME3 stuck the landing. I’d argue that this is, in large part, because the ending moved away from the Reapers.

Background for those of you who didn’t obey my demands and play the entire Mass Effect series: ME2’s leading antagonist is a Reaper named Harbinger. In the climactic cutscene at the end of the final mission, it delivers a very sinister final monologue and leads the Reaper charge against galactic civilization. For all of Mass Effect 3, I wanted nothing more than to personally kick this Reaper’s ass.

Instead, I had a strange conversation with an AI I had never seen before, where it hastily explained the reasoning behind the Reapers’ actions and said I could now push one of three buttons to make the whole thing just go away. There was no final boss battle.

Many people have argued that the final choice felt artificial or that all of the options were essentially the same, and that’s why the ending didn’t work for them. I won’t argue with that reasoning, but for me what didn’t work was that it felt thematically disjointed from the rest of the series. I spent three games and well over a hundred hours getting amped to fight an unknowable enemy—one who had insisted from the very beginning that my life, my entire species, was meaningless in the face of a vast universe.

The ending undermined the things that made the Reapers effective enemies in the first place.

I think it’s because the Reapers are such strong antagonists that so many gamers were disappointed by the end of ME3. Consider one popular fan theory, Indoctrination Theory, which claims that the end of the game is just a hallucination because Commander Shepard has fallen under the influence of the Reapers. Aside from being philosophically fascinating, this theory reasserts the Reapers’ control as antagonists—even at the expense of Shepard’s control as the protagonist.

A villain so good that players want to lose to it? That’s one for the books.

Prompt: Come up with an antagonist that’s so good that you want them to win. Then figure out a way to make the protagonist’s victory satisfying anyway.

Thoughts on the Reapers? Just want to geek out about Mass Effect with me (I could do this all day)? Jump in the comments!

One Reply to “Monster of the Week: Reapers (Mass Effect)”