He’s big, he’s loud, and he’s the most iconic character to come out of any of Studio Ghibli’s films. He may even be the most recognizable anime character anywhere in the world.

So what is it about Totoro that’s so appealing?

Let’s start with his story in Miyazaki’s My Neighbor Totoro.

The movie begins with a family moving into their new house in the countryside. Their new home turns out to be a little bit more magical than expected when the two young daughters stumble across a huge, bear-like forest spirit – who they name Totoro. Whimsical and kindly, Totoro brings little glimpses of magic into their lives, ultimately helping the girls bring a gift to their hospitalized mother.

It’s far from Studio Ghibli’s most exciting plotline, but, hey, that’s okay – that’s not what My Neighbor Totoro is all about. It’s a charming little film about kids exploring nature, settling into country life, and having a little fun along the way. It moves seamlessly from the mundane to the fantastic, the same way that a child might add games of the imagination to make daily life more playful.

Totoro is the big, fuzzy imaginary friend that every kid wishes they had.

Seriously – think back to the flights of fancy from your childhood. Totoro’s powers include a ton of the most common youthful fantasies.

What do you think is the number one magical ability kids wish for?

I don’t know about you, but I’d put flight pretty high up there.

Yep, Totoro is a huge, bear-sized creature who can fly. Don’t worry about it. He uses a magic umbrella. It’s like Mary Poppins, but with no bullshit songs about drinking your medicine.

The image of a big forest monster holding a tiny umbrella is deliberately silly. It doesn’t make sense – even if we accept that it’s a flying umbrella, you’d think it would need to be bigger to carry his weight – but Totoro doesn’t care! He’s a giant forest spirit! If he wants a tiny umbrella, he’s gonna get a tiny umbrella. The absurdity in the contrast just makes him more charming.

What other abilities does Totoro have? Well, I’ve mentioned a few times that he’s a forest spirit – that means that he has some power over nature.

In one scene, Totoro helps the children grow some seeds that they’ve planted into a towering patch of forest overnight. Miyazaki frames the sequence so that it could easily be read as a dream, but who cares? Not the kids, that’s for sure – they still had fun doing their real-or-imagined dance around the seeds. The sprouts in the garden the next morning might not be towering trees, but it still feels like they are. Rather than diminishing the tiny sprouts, the fantasy elements underline that there is wonder in new life, however small.

Nature is one of Miyazaki’s favorite themes, so it’s fitting that his most famous creation would have nature powers. But Totoro’s magic isn’t just a superpower tacked on for fantasy’s sake – he embodies the spirit of wilderness down to his core. He’s unpredictable, loud, wild, and at first glance, maybe even a little bit dangerous.

None of those are bad things.

If anything, they make him more alluring – especially as a children’s character. After all, isn’t it part of being a child to find your place between wild, animal fun and learning to be human in a civil society?

Totoro doesn’t just share the world of the forest, he shows us through his personality how lovable nature can be.

Beyond his magical powers, Totoro’s mundane qualities also make him an unforgettable character.

There’s his physical appearance – I mean, he’s basically a giant teddy bear. Don’t tell me you wouldn’t like a hug from a giant, squishy furball like that. He’s like a shaggy beanbag chair. A+ huggability rating.

He’s also delightfully alien, yet curious. Totoro doesn’t seem to fully understand how humans think, at least at first, but he spends a lot of time observing and interacting to try and make sense of his new friends. Again – this must be pretty relatable to a young kid trying to figure out the world! Plus, when his buddies are feeling down, Totoro has absolutely no problem making a fool of himself to cheer them up. He can find fun in the most unexpected places. That’s a good kind of person to have around!

Finally – well, okay, look, you might not think this strictly counts because it’s not about Totoro himself, but – the guy has cool friends!

His BFF is a giant cat who is also a bus. 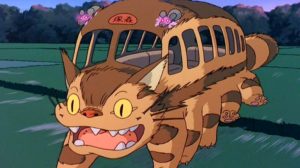 How does that even work? Don’t worry about it! Hop on in, you’ll never need an Uber again! Look, if you don’t think the catbus is inherently cool, I don’t think there’s anything I can do to help you.

So what exactly is the verdict on a monster so benevolent? So fluffy? So lovable?

Well, Totoro definitely has his wild side – he’s most monstrous in his capacity as an unruly nature spirit. But that’s not to say he’s monstrous as a moral judgment. If anything, I think that we as humans can be too quick to judge anything unfamiliar to us, like nature, as monstrous. The rest of Miyazaki’s filmography can attest to that.

In that sense, I would argue that Totoro is more alien than he is monstrous. But whatever you want to call him, he’s left a monster-sized mark on global pop culture, and I for one salute our fuzzy overlord!

Do you think Totoro should count as a monster? Or maybe you want to shout out another Studio Ghibli creature for me to write up? Come say hi in the comments.